To discover this sunny (and that's official) corner of south-east England, rent an Essex holiday cottage to see this land, bounded by the North Sea and Thames Estuary. Essex shares its ancient Anglo-Saxon origins between age-old woodlands, pastoral farmlands and busy estuaries. From the decorative Byzantine frescoes of Copford Church, and Layer Marney Tower, which has the tallest Tudor gatehouse in England , Colchester, the earliest Roman settlement in Britain, to the busy port of Harwich, gateway to Europe, and Stansted airport, Essex has seen it all. Forest walks, rides and glades for picnics, together with a lake are all to be enjoyed in Hatfield Forest. Visit Audley End House and admire the Adam-design Tea House Bridge, and Finchingfield, a real chocolate-box village - so don't forget your camera. Real history can still be seen at the medieval bridge in Pleshey, a village which existed long before the Normans arrived.

The Tower is an award-winning rural cottage with sweeping countryside views and unique construction. Situated near Latchingdon in Essex, the circular building has preserved the 1930s utilitarian architecture and blended it successfully with true sophistication, a vast balcony and open spaces.

Championship golf courses and spa treatments beckon at Ramson Lodge, a contemporary cottage near the Stoke by Nayland Hotel, Golf and Spa in Suffolk. Walks and fresh air also await at the surrounding Constable County Area of Outstanding Natural Beauty, while lovely views are promised at the cottage. 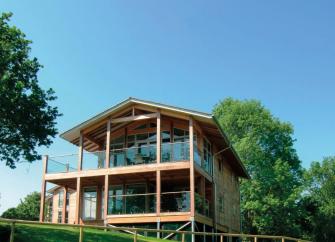 Pearmain is a contemporary cottage surrounded by an Area of Outstanding Natural Beauty in Constable County, Suffolk, close to the Stoke by Nayland Hotel, Golf and Spa. Treat yourself to a spa treatment, round of golf, swim or soak in the hot tub, and relax in a stylish cottage with delightful views.

This delightful lodge on Wakes Hall Farm is a haven of peace in 500 acres of private land. Having recently been awarded a five star AA award it features an open plan kitchen/dining/sitting area, a verandah and a hot tub. The historic town of Colchester is 40 minutes away. 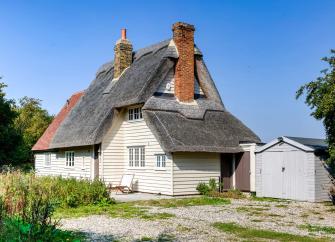 Raindrops on Roses is a gorgeous 700-year-old thatched cottage surrounded by countryside near Hatfield Forest. The cottage is perfect for outdoor rural walks and boasts expansive gardens with wonderful views, traditional features such as beams, and a cosy log fire.

Brook Lodge is a delightful romantic cottage set on 500 acres of Wakes Hall Farm in Essex. The pet-friendly cottage sleeps 2 and sits by a small lake amid woodland and tranquillity. The sophisticated, eco-friendly cottage boasts an enclosed garden & deck with a hot tub for admiring the lovely views.